You are here: Home / Uncategorized / 27 YEARS OF LAUGHS

Jim and I left Sunday on an RV road trip to Myrtle Beach.  This is a big deal for us, because we’ve never done it without kids.  We have spent many a vacation camping at the beach with our kids and we have many, many great memories.  In this new phase of life, the nearly empty nest, with the last of four children still at home but very much a college student with her own life and agenda, we are having all kinds of new experiences.  I keep asking myself, “What did we do before children?” But all I can remember is eating at Wendy’s and playing card games.  I know we laughed a lot.  That has been a constant throughout our marriage and one of the reasons I fell in love with Jim in the first place.  The man is FUNNY.  So we had a few humorous moments this week.

The beach is different this time of year.  There’s a reason most people come in the summer time.  It’s cooler now and there’s more wind.  The beach is still pretty, but the water is super cold.  Only crazy people swim in that right now.  We did spot a few crazies. 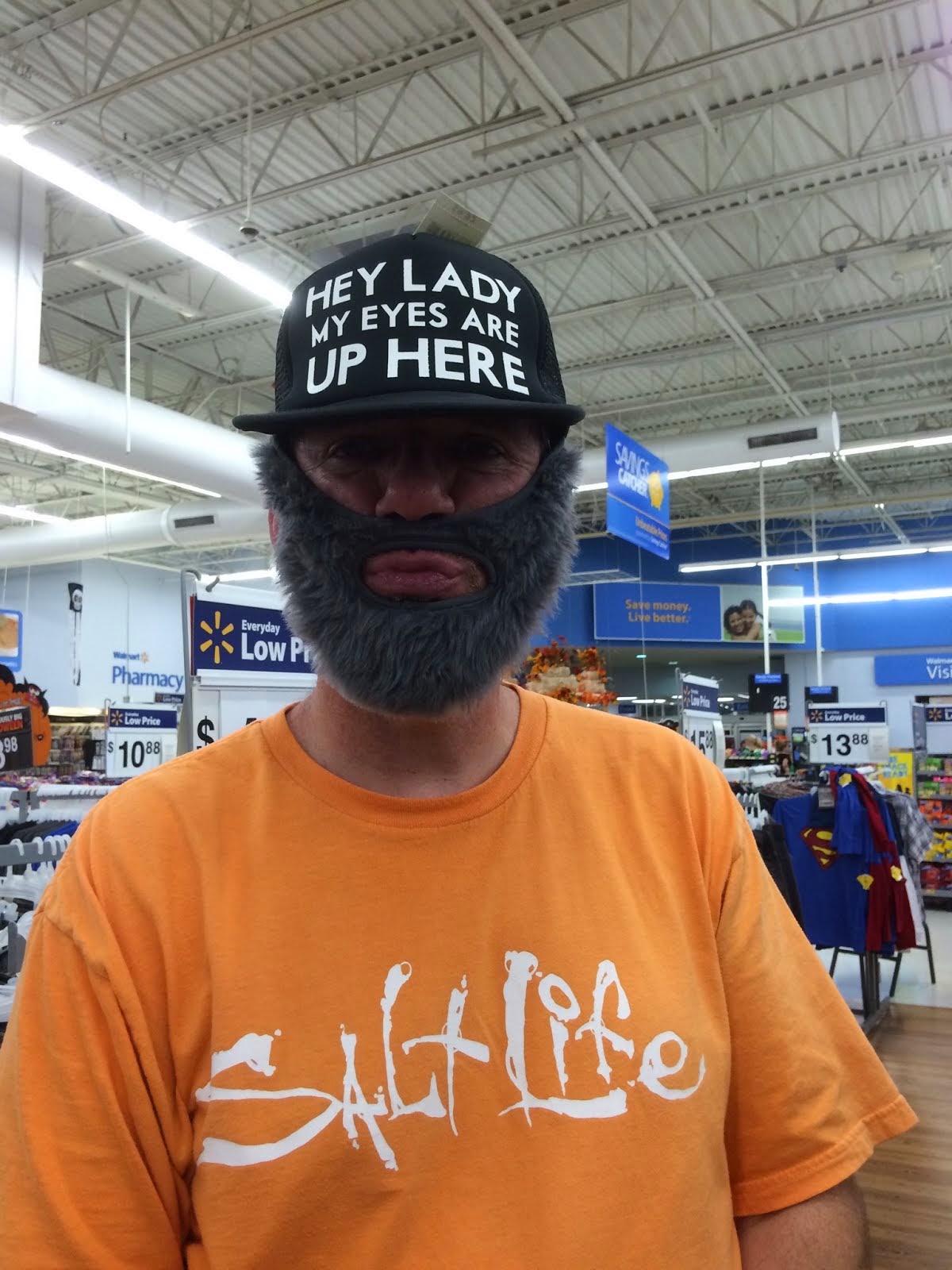 This was one of them, but he was in Walmart.
We tried to find a good shade umbrella, but had to settle for one of the picked overs at Walmart.  They’re not used to any kind of a beach crowd right now, either.  Turns out we shouldn’t have wasted our money, because it was so windy that umbrella would have been rolling down the beach in no time. 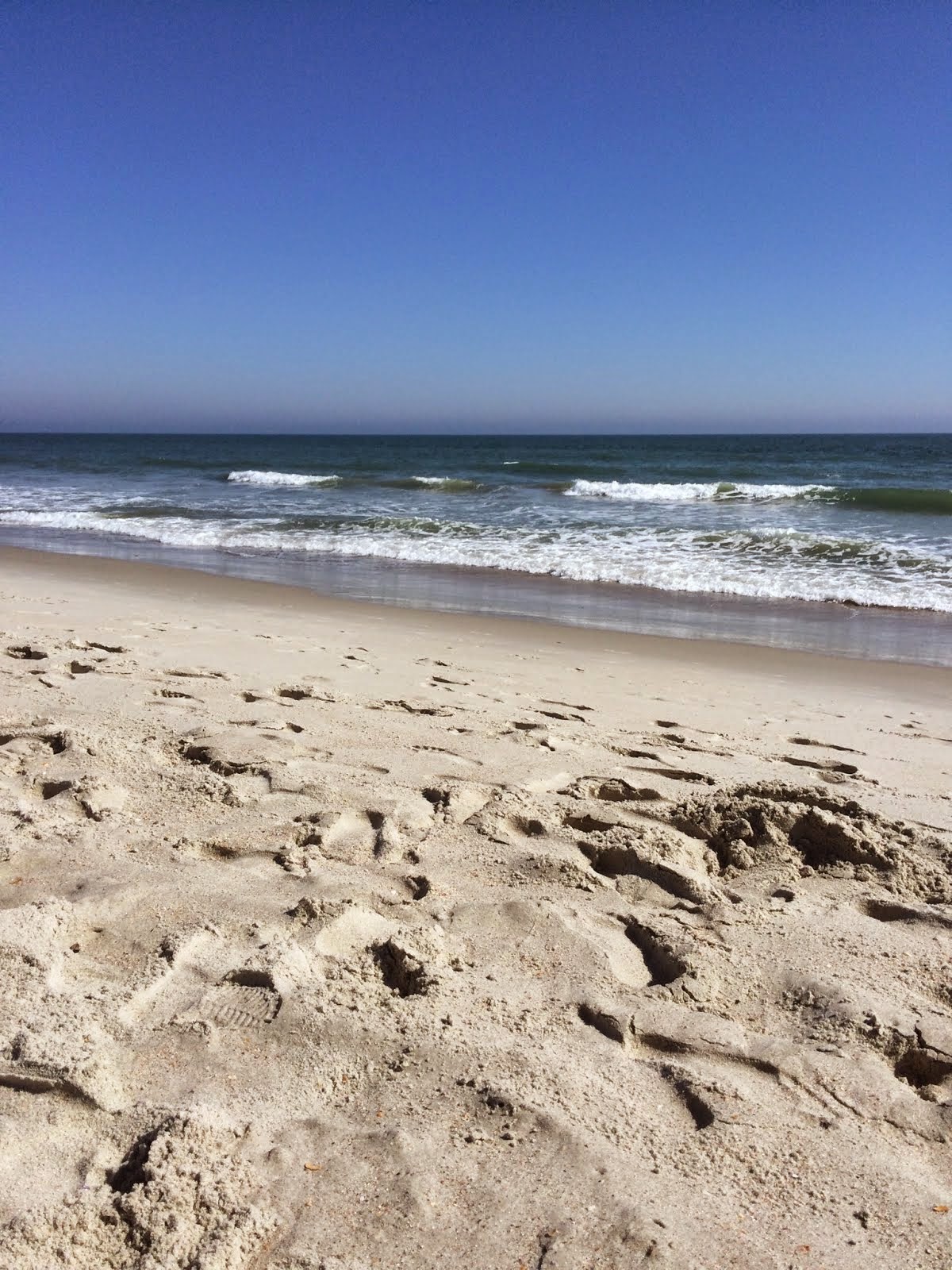 We walked on the beach and looked for shark’s teeth, a favorite past time.  Jim is really good at it, he taught me how.  We sat on the beach for a while and watched the water, and I read a book.  Jim doesn’t read, and he rarely sits for very long, so he usually either looked for shark’s teeth or took  work phone calls.  This wasn’t a vacation for him, he was still taking care of business.  Which is probably good, because he needed something to do while I vegged on the beach. 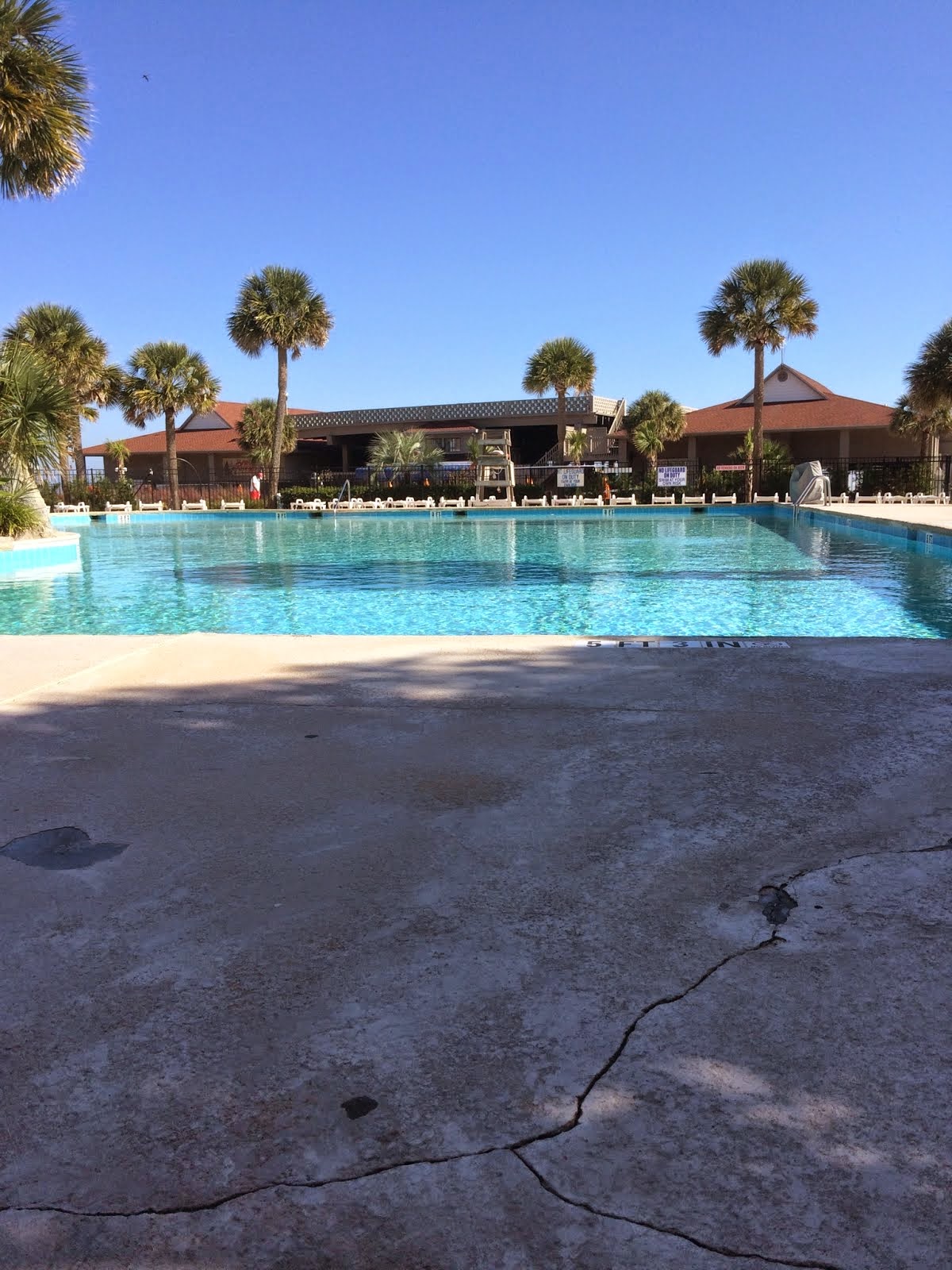 When we got tired of the ocean wind, we took a walk over to the newly developed “lazy river”.  It was beside the pool, which was completely empty.  I’ve never been here when it’s been this sparse at the pool.  I wondered why,since there were still a good amount of people camping.  We walked over to the “lazy river” and grabbed an inner tube built for two.  Jim got in first and let out a high pitched squall.  The water was ridiculously cold.  He positioned the inner tube so I didn’t have to get very far down the steps into the water in order to get in the tube.  It took my breath away once my back side hit the water through the inner tube hole.  I could hardly relax, it was so cold.  There were 3 other floaters on the “lazy river”, which was really just a big circle around three tall, winding slides.  Once I saw how small the “lazy river” was, I was pretty relieved.  Jim laughed at me the whole time around the circle because I never did relax.  This was the worst “lazy river” I’d ever been on!  As soon as we reach the starting place, we jumped out.  “Well, I’m done with that.”  commented Jim.  “At least we can say we did it.”  “‘Lazy river’ nothing.  It’s more like a circle of ice water.”  I contributed.  We walked over and dipped our toes in the pool water.  Same freezing temperature.  Now we knew why not a soul was in that pool.  But since there were 100 empty reclining chairs around it, we took advantage of the sunshine and relaxed by the freezing waters.

This is the time of year when I listen to Christmas music.  I start in October and don’t quit until about the third week in January.  I just love it, always have.  I’m better than I used to be – at least it’s not the end of August.  So every day when I took my shower in the camper and fixed my hair, I listened to Christmas music on my iPhone.  The irony of this did not escape Jim.  “We’re at the beach, it’s 70-80 degree weather, and you’re playing Christmas music.  This is nuts.”  Yeah, it is, but that’s how I roll.

We took a lot of walks.  My daughter, Kylie, and I established night time beach walks a few years back, because we enjoy seeing the different ways people decorate their camp sites with lights, but mostly, so we can see inside their campers because the lights are on.  It’s always so interesting to see the different layouts and styles.  So Jim and I continued the night walks.  There is a different cliental this time of year.  “Snow birds” is the term most generally used.  The first night, there was a big hoopla going on at one campsite decorated with lighted palm trees and pink flamingos.  It was the Holiday Rambler kickoff night, and there was music and dancing and general hub-bub on this front row site for all to see and anyone who wasn’t in the Holiday Rambler club to envy.  We were able to walk by and get a video for our kids, whom we knew would get a kick out of that.

This morning we took another walk.  There are a LOT of geese here right now, so I snapped a picture. 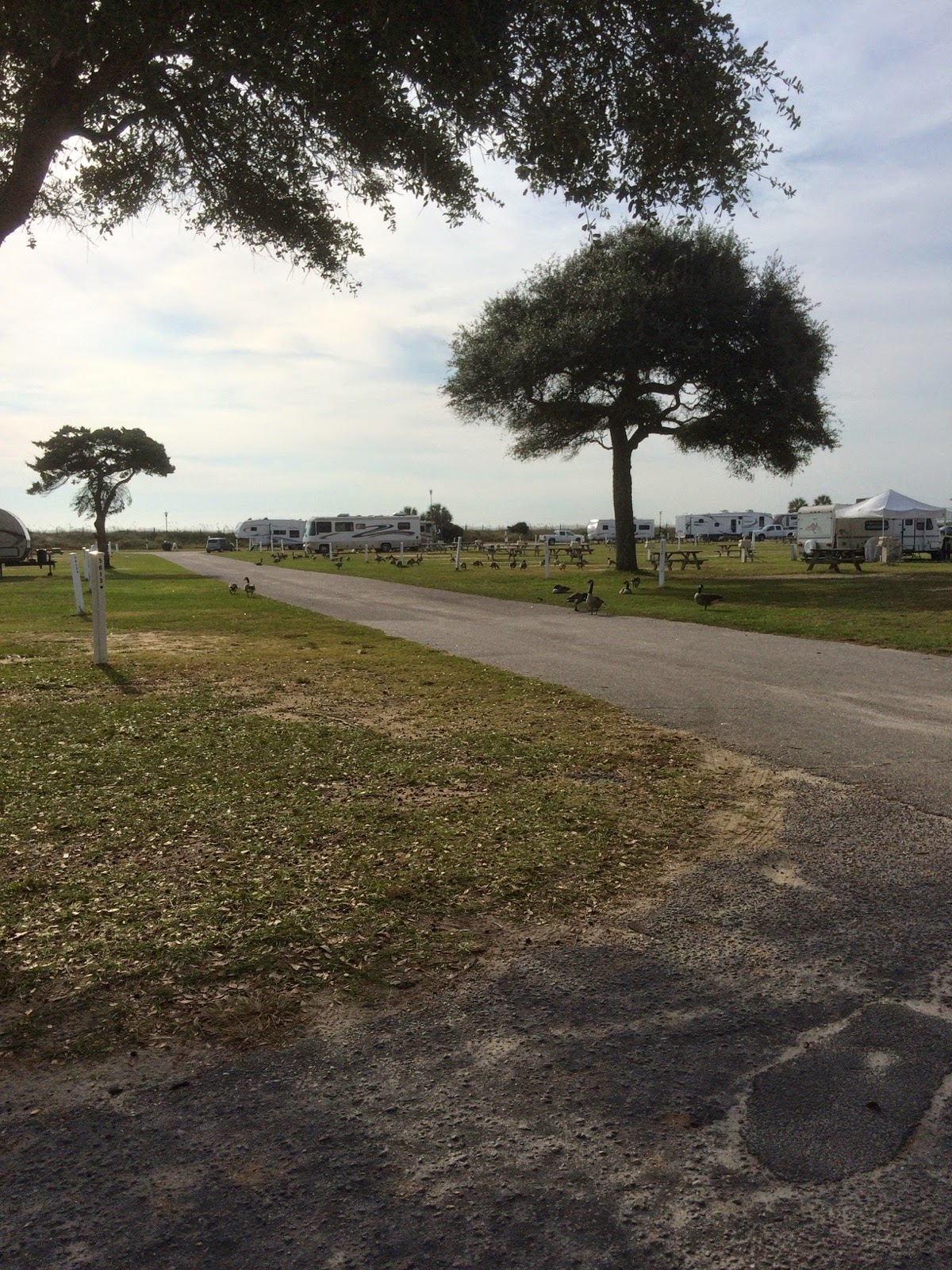 As we conversed, Jim remarked, “I keep finding hair in my mouth this morning.”  “What?”  I laughed.  “Yeah, like every time I turn around today I cough another hair up like they’re in my mouth, I even found one in my teeth!!”  I giggled some more.

Then I took my shower and dried my hair.  In my regular spot in the camper because of where the outlet is, beside Jim’s side of the bed.  I lose a lot of hair every day during this process, and I had wondered if drying my hair in our bedroom would ever become a problem.  And then I remembered Jim’s hair comment.  I began to chuckle.  A lot of my hair was probably ending up on his side of the bed, possibly even his pillow.  This was why he had hair in his teeth.  I laughed some more, and didn’t tell him.

We visited the Ripley’s Aquarium today and enjoyed it a lot.  We’d been there before several times with our kids, plus about 5,000 other people trampling each other, so it was nice because there wasn’t a crowd since it’s off season. 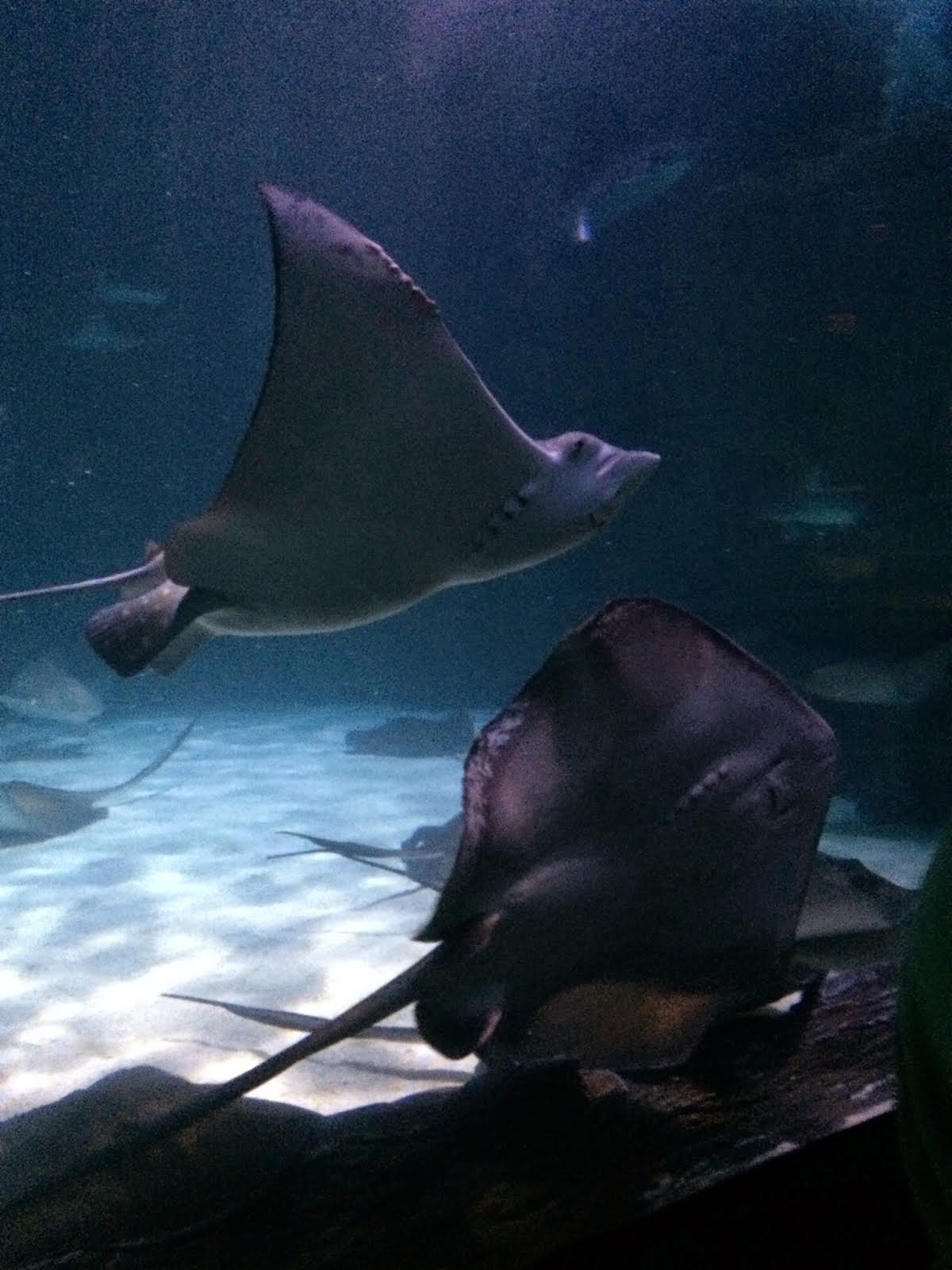 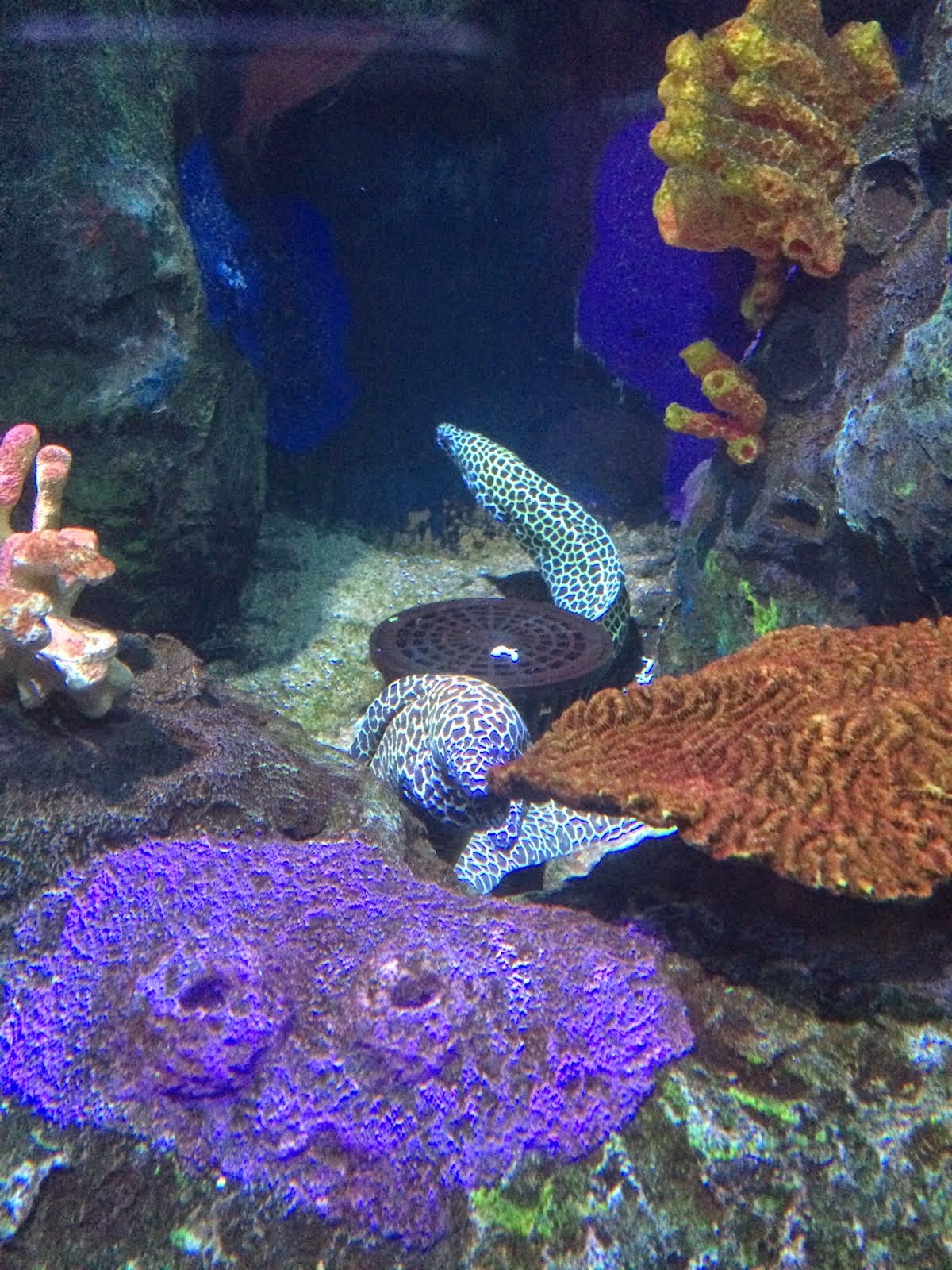 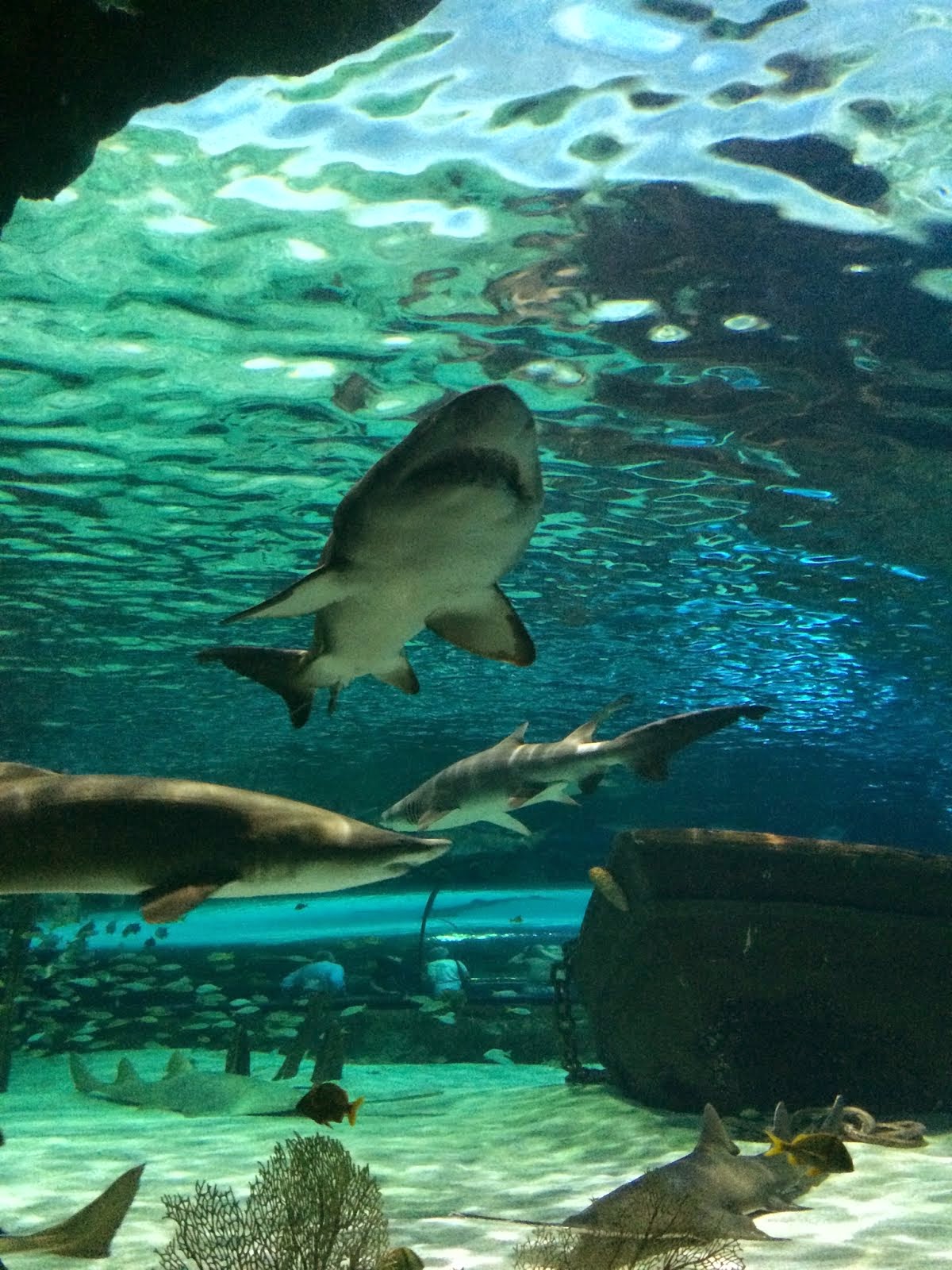 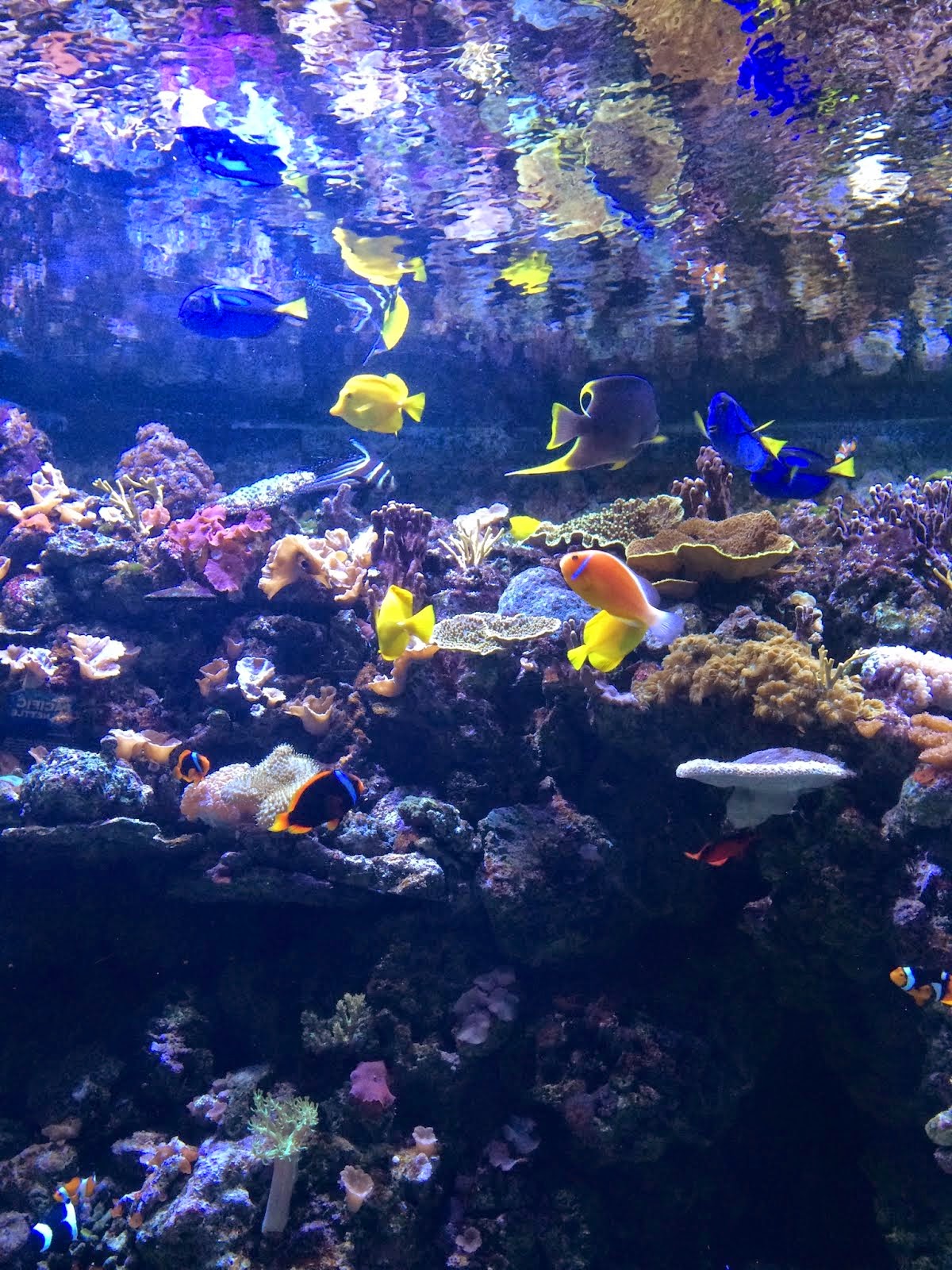 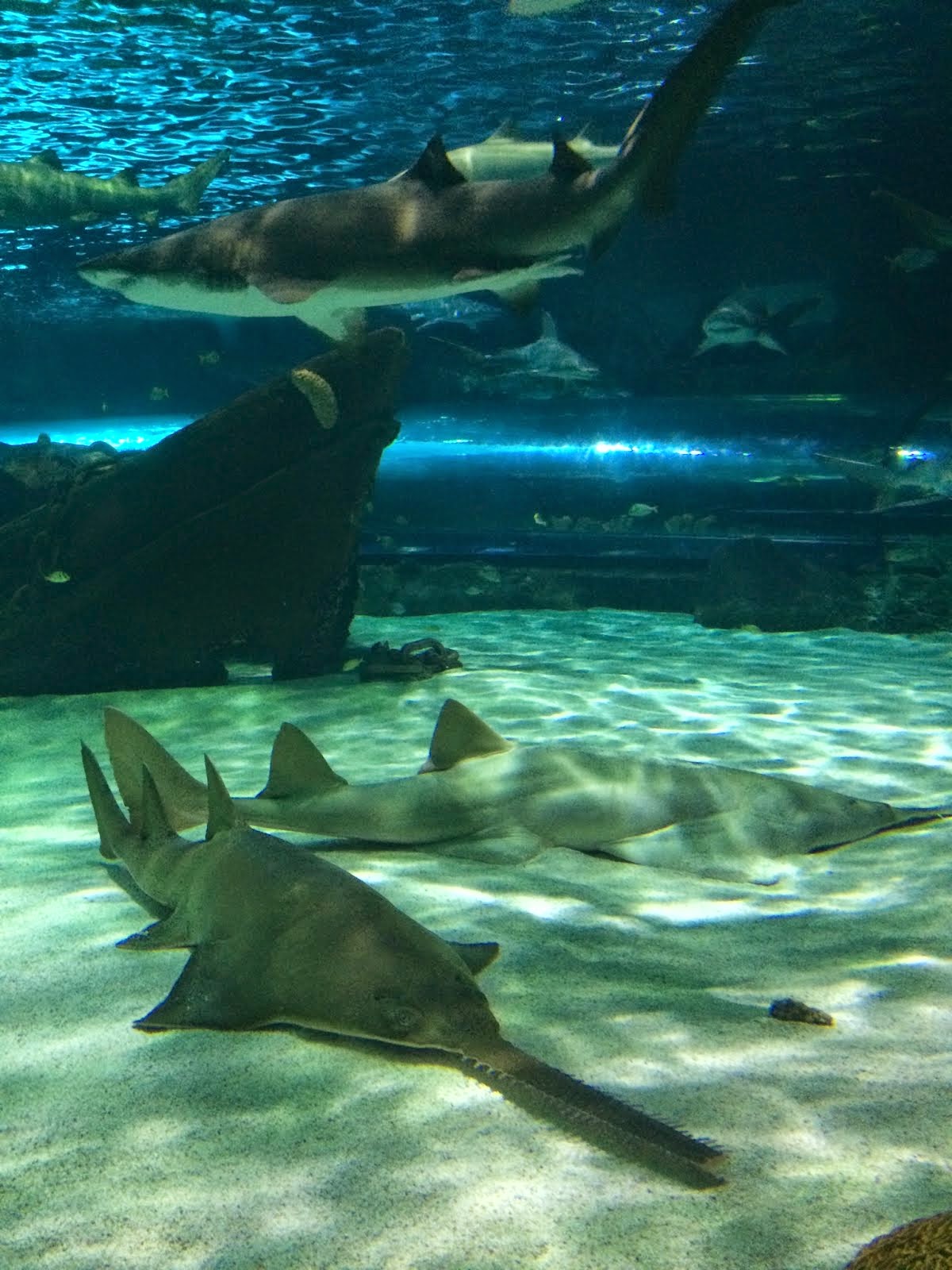 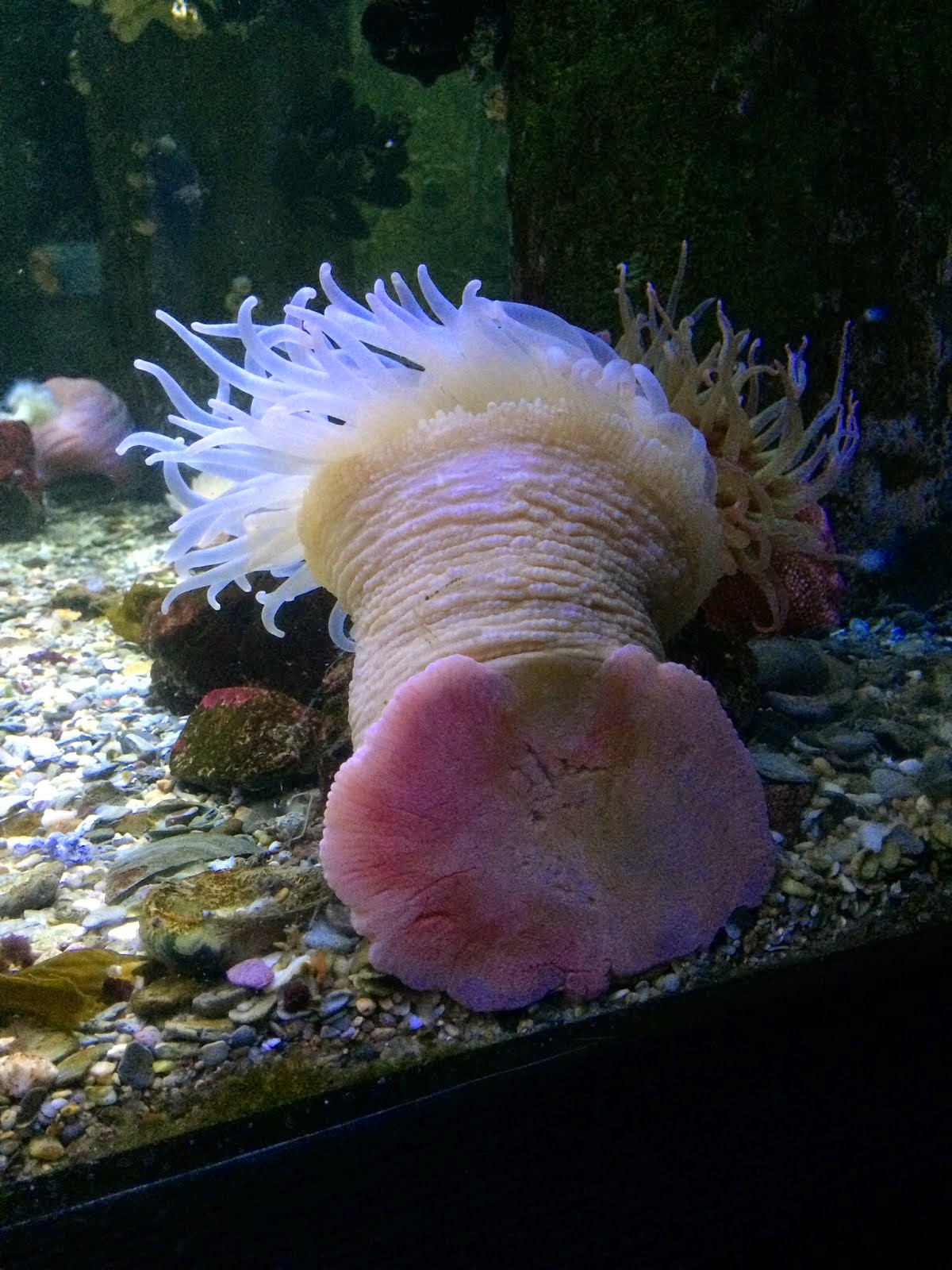 We have missed the kids a lot this trip, but we also didn’t dwell on it.  We decided to remember all the negative things about camping with them:  crowded living conditions, lots of sand in the camper, frequent dumping of the water tanks due to lots of showers, numerous trips to Walmart for more groceries, and washing towels every 3 days.  When we first arrived, I swept out the camper and accumulated a gigantic hairball, and I know exactly which child all that hair came from.  And then I promptly missed her, and the last time we took a trip in the RV, which was our trek out west last May with three of our four kids.  Ok, it’s true, we would really rather have to put up with all of that stuff if only we could rewind time and bring the family back together under one roof.

But, we will do the next best thing, and learn to enjoy life together, alone again as in the beginning, with the Wendy’s and the cards and the laughter.  Especially the laughter.

And maybe Jim won’t ever read this blog entry and find out why he has hair in his teeth.

“A merry heart does good, like medicine, but a broken spirit dries the bones.”  Proverbs 17:22