You are here: Home / Empty nesting / A DIFFERENT KIND OF CHRISTMAS

Christmas was a little different around here this year.  One less stocking was hung, we had a new little puppy (grand dog) in the mix, and we went over the river and stopped at the ER on the way to grandma’s house.

I’d say we’ve done pretty well with the whole “oldest daughter is married” adjustment period.  We love our new son, the two of them are happily in love, and we get to see them often.  However, when Taryn asked to have her stocking to hang in her own home this year, Jim and I both had strong reactions. 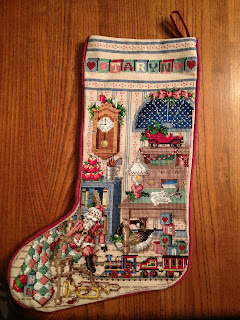 This is not just the stocking of our eldest child – although it is the one she used for the past 23 years.  This is a labor of blood, sweat, and tears.  Do you see her name at the top?  Notice all the stitching, backstitching and outlining.  I love this stocking, because it was my first true masterpiece.

You may ask, “Did you do that for all your children?”  Heck, no!!!  I made it through the next kid’s stocking and nose dived halfway through the third.  Thankfully, my seamstress mother came to the rescue and sewed the last two stockings out of quilt scraps.  It sounds bad, but they are really cute, and the girls seem to have recovered.  Besides, they get accused of being the favorites by the older two anyway, so it all evens out.

In case you’re wondering, yes, I gave her the stocking. 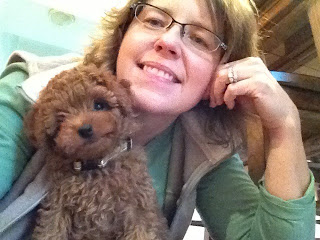 Doesn’t this picture just scream “Christmas card”?!?  I suggested it but my daughter wanted a picture of herself and her husband with their dog.  Imagine.  Anyway, this is Murphy, the surprise dog.  Talk about planned parenthood.  He entered our lives just after Thanksgiving and stole our hearts – even though we advised the newlyweds against getting a pet because of their schedules.  Don’t worry, the “grandmas” take turns babysitting.  Taryn doesn’t even like animals, but she seems to be loving this one – who wouldn’t?  Isn’t he just the cutest? I know, I know.  I call myself “G-maw” and Jim “Grandpa”.  He gets mad and says, “I am NOT that thing’s grandpa!”…and then he gets down on the floor and plays with Murphy.

I don’t have a picture of the ER but the story goes like this:  Nolan got sick the week before Christmas, started feeling better, and then took a turn for the worse.  On the fifth day of the fever (you thought I was going to say Christmas), we decided to get him checked out, but alas, it was Christmas day.  Nothing was open but the ER, and since it was on our way to where we were headed (grandma’s), we stopped.  The doctor checked everything out and sent us on the way with the diagnosis confirmed – it was indeed the flu.  He went to the ER on Christmas day and all he got was a lousy mask to wear around the family all day long.  (Which he didn’t).

It’s kinda sad when your kid is sick on Christmas – every parent has been there. But Motrin and Tylenol got us through it. 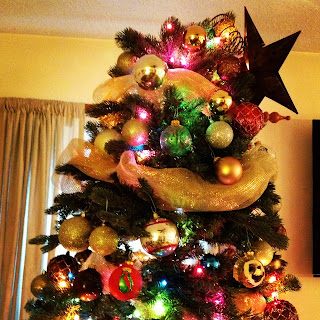 Not all Christmases turn out perfect.  This is the star that we keep jammed up against the ceiling.  If anyone touches the tree, this is what happens.  Is it still a Christmas tree?  I’m told people pay big money for trees that look like this now!  It’s still Christmas, just a little bit different.  God still gave His Son for us.  He still loves us.  He never said that life would be easy and everything would go as planned, but He did say, “I am with you always, even unto the ends of the earth” (Matthew 28:20).  Immanuel means “God with us”, which fulfilled the prophecy of Isaiah 7:14.  This is why the child of God celebrates Christmas!  Not because it’s perfect, but because God is with us.

Was your Christmas different too?  Do you feel as if things were a bit scattered, you didn’t get to do everything you wanted, or something was missing?  It’s ok.  God is still here, and He knows.

It was still a good Christmas, so many blessings for which to be thankful!  Next year we may have more than one stocking missing, more than one “grand dog” (or gasp maybe a grand CHILD), and who knows, maybe the whole family will get the stomach virus.  I’m going to count my blessings and be content, journal, and reflect on it next year.

I think I’ll pull out that third Christmas stocking and see if I can finish it before next year.  Miracles can happen!

📝DECISION HELP⁠ Are you a list-maker? I am.

Do you believe in 𝐂𝐇𝐑𝐈𝐒𝐓𝐌𝐀

We are a participant in the Amazon Services LLC Associates Program, an affiliate advertising program designed to provide a means for us to earn fees by linking to Amazon.com and affiliated sites. © Ruthie Gray and Ruthie Gray.Mom, 2019. Unauthorized use and/or duplication of this material without express and written permission from this blog’s author and/or owner is strictly prohibited. Excerpts and links may be used, provided that full and clear credit is given to Ruthie Gray and RuthieGray.Mom. with appropriate and specific direction to the original content.
Close the Content Dock