I have mentioned that we’ve been in the throes of basement renovation.  That was completed last week.  Yay!!!  Our two “away” kiddoes hadn’t seen the finished project yet, only a picture I sent them of the main area.  They got to come in over the weekend, excited to see the finished product.

My son arrived home around midnight Thursday.  Of course I woke up, and I could tell the basement light was on so I decided to go down (two flights of stairs) and see what he thought of the joint.  As I reached said floor, he was rounding the corner with an old pizza box in his hand he had just pulled from the garage ‘fridge.  “Is this pizza still good?”  Part of the problem with having an extra refrigerator in your garage is that you tend to forget about the food in it.  That pizza was a month old.  Good thing I got up and saved him from food poisoning.

“Well, I LOVE it!”  Nolan exclaimed about the basement.  When I had sent him the picture earlier in the week, he texted back, “Where is that?”  That’s how different it looks. I sent the picture to my daughter and her response was, “IS THAT OUR BASEMENT?!”  And, “I love that little place wow holy cow…I’ll bring some artwork to hang on those walls.”  (That’s the artist coming out in her.)

This area of our home has been used in so many capacities down through the years.  It has always been our dream, since we moved in 16 years ago this month, to finish the basement.  When we built the house, we didn’t have the funds to finish that part, so for years it has looked like this. 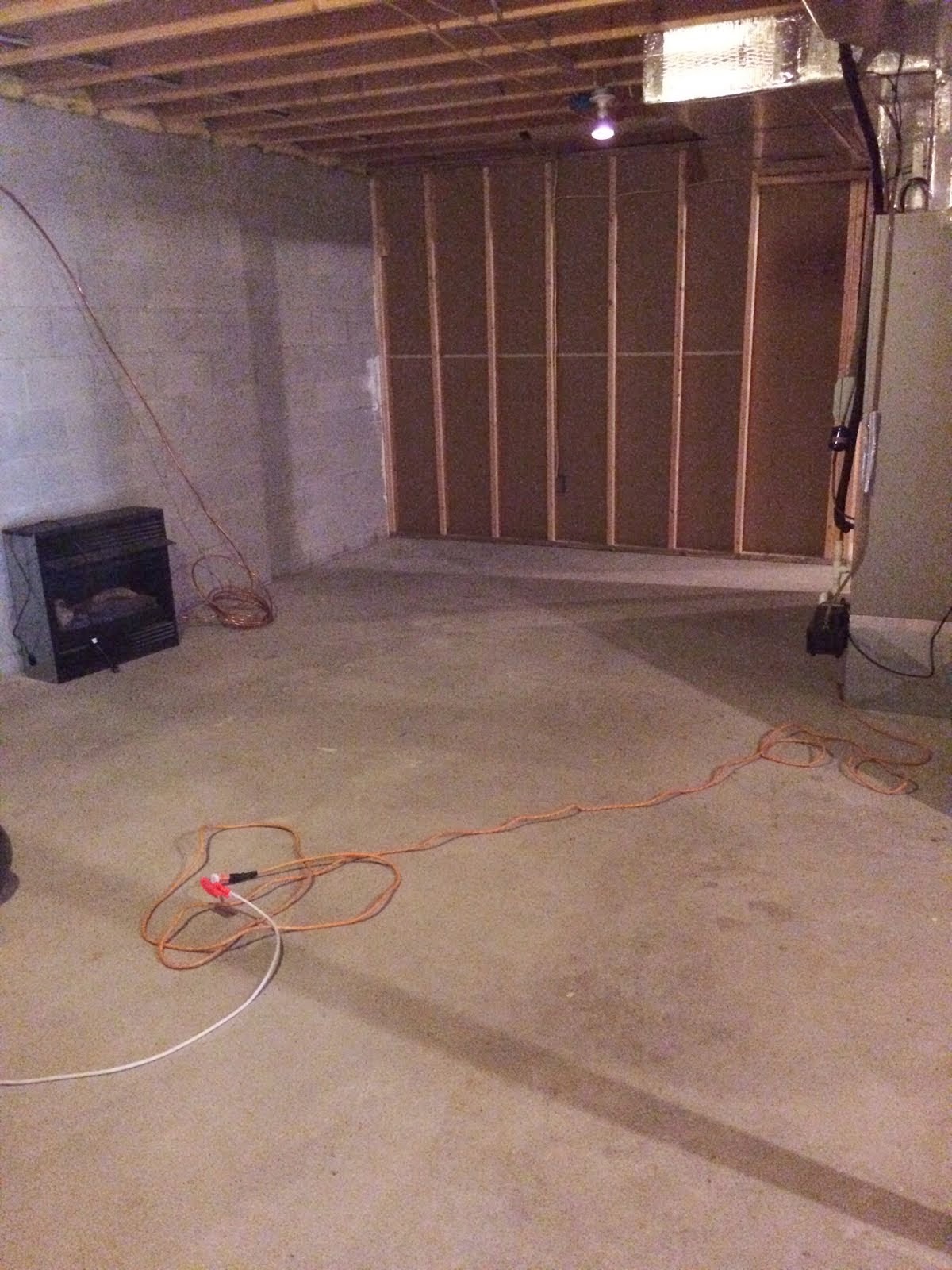 Only not so empty.  Believe me, we had a ton of junk in there.  It’s all in the garage right now, waiting to be moved back.

Down through the years, the function of this area changed to suit our needs.  The main function of course was to hold all our junk.  But we used it for other stuff too.  For the first several years, we had a ping pong table.  We used it – about 3 weeks out of every year when we would clean it off and have a major purging.  We had an old couch in another area of the basement for the kids to sit and watch VHS movies.  Yes, back in the day.  The kids used to play down there for hours – they had plenty of toys we were able to keep there because of the extra space.

Once we realized the ping pong table was a useless cause, we got rid of that and moved the couch around.  We shelled in a bedroom and a rough bathroom, never really finishing the walls in the bathroom, we just left the putty and our oldest moved down there when she came home from away college to attend college locally.

Our son eventually set up a recording studio and the kids concocted all kinds of crazy songs.  He spent hours down there playing drums, recording keyboard sounds, electric guitar, bass, and mixing it all together.  We figured if he got famous and rich someday, we’d get to benefit and all the excess noise would pay off in the end.

We bought new living room furniture and moved all the old down to the basement – including the tv.  This became a little better set up for the kids when they had friends over and wanted to hang out someplace other than their bedrooms.  I recall lots of games and crazy times down there.  They loved it, and they couldn’t hurt anything because everything down there was either old or junk.  Perfect.

Jim set up my treadmill down there, and I had a pull up bar and some weights.  Don’t get me wrong, I can’t do pull ups.  I couldn’t even reach the thing without standing on the couch.  I mostly just hung from it.  At 5″2 I’m still working on my height.

Of course, there were all the Christmas decorations and two artificial Christmas trees.  Accumulated furniture with nowhere else to go.  Old toys being saved for who knows what.  And the crib.  I saved that crib for years so that my grandchildren could someday use it at my house.

So one day Jim says “I’m redoing the basement, and we have to move all our stuff out into the garage.”  So we did move it.  Every.  Single.  Piece.

There was the old coffee table that we’d moved down 3 years ago.  It had sat upstairs in our tv room for years and it had all kinds of drawers and compartments that the kids used to shove toys and junk into.  That coffee table had seen some serious use.  But, it was time to give it to a new home, and guess who got to clean it out.  Oh, the memories.  Old Pokémon games.  Gameboys.  Unfinished cross stitch projects.  Tons of home movies.  Play jewelry.  Memories.  By the time I was done, my face was wet, and it wasn’t because of the plastic squirt guns.  This coffee table was the very icon of my kid’s growing up years.  It was old, battered, and used, but so well loved.  I don’t even love inanimate objects.  I don’t get attached to “stuff”.  But the day I watched that coffee table get carted off to a new home where some other family would love and use it, I felt so sad.  There went a huge piece of our family history on the back of a truck.  It didn’t help that I had to follow it all the way out to town.  Along with an old towel rack, Christmas decorations, and a dresser.  There were other families out there that needed our stuff, and that turned into a good thing.  I just hope they love that coffee table as much as we did.

Actually, we were able to give a lot of our old stuff away to people who really needed it, and that was a good thing.  The guys doing the renovating had connections, and they took it off our hands, which was a great deal.  We ended up with only half our junk to have to move back.  That hasn’t happened yet, but Jim assures me that he has designed plenty of storage space for it, so I’ll let you know.

He designed a new exercise space for me complete with tv and hopefully an elliptical since my treadmill is trying to kill me.  For some reason whenever I run, it speeds up to a crazy amount (like 8.5 mph) and I almost fall off the back.  And then all of a sudden, it slows way down to a crawl.  That treadmill has a mind of it’s own and after using it for 12 years, I’ve decided I’ve earned a new non life threatening machine.  At least I can say that I never used it as a clothes hanger.

Jim has relocated his home office to the basement and he has earned it, after using a cubby hole for the past several years.  Only he is now calling the entire basement his “office”.  He says tv room is the executive lounge room and the full bath is the executive washroom and the bedroom is the break office.  It is literally the place where the deer and the antelope hang, because he’s had 3 giant deer heads and one antelope head just waiting for a proper home.  He says I now need to ask permission to enter his “office”.  That’s a bunch of hogwash, because once Mr. Social Butterfly has been down there alone for about 30 minutes he’ll be begging me to come join him.  I know how this works.  I’m not worried.

Over the weekend we had family and a few friends drop in.  Jim took everyone for tours of his new “office”.  Everyone wanted to spend time down there.  Talk about a transformation – from a dingy looking, cold atmosphere to a warm, inviting, cozy space, this is where we will make new memories for years to come.  Our grandson, Sawyer, will never remember what the basement was like before the renovation.  It’s the end of an era. 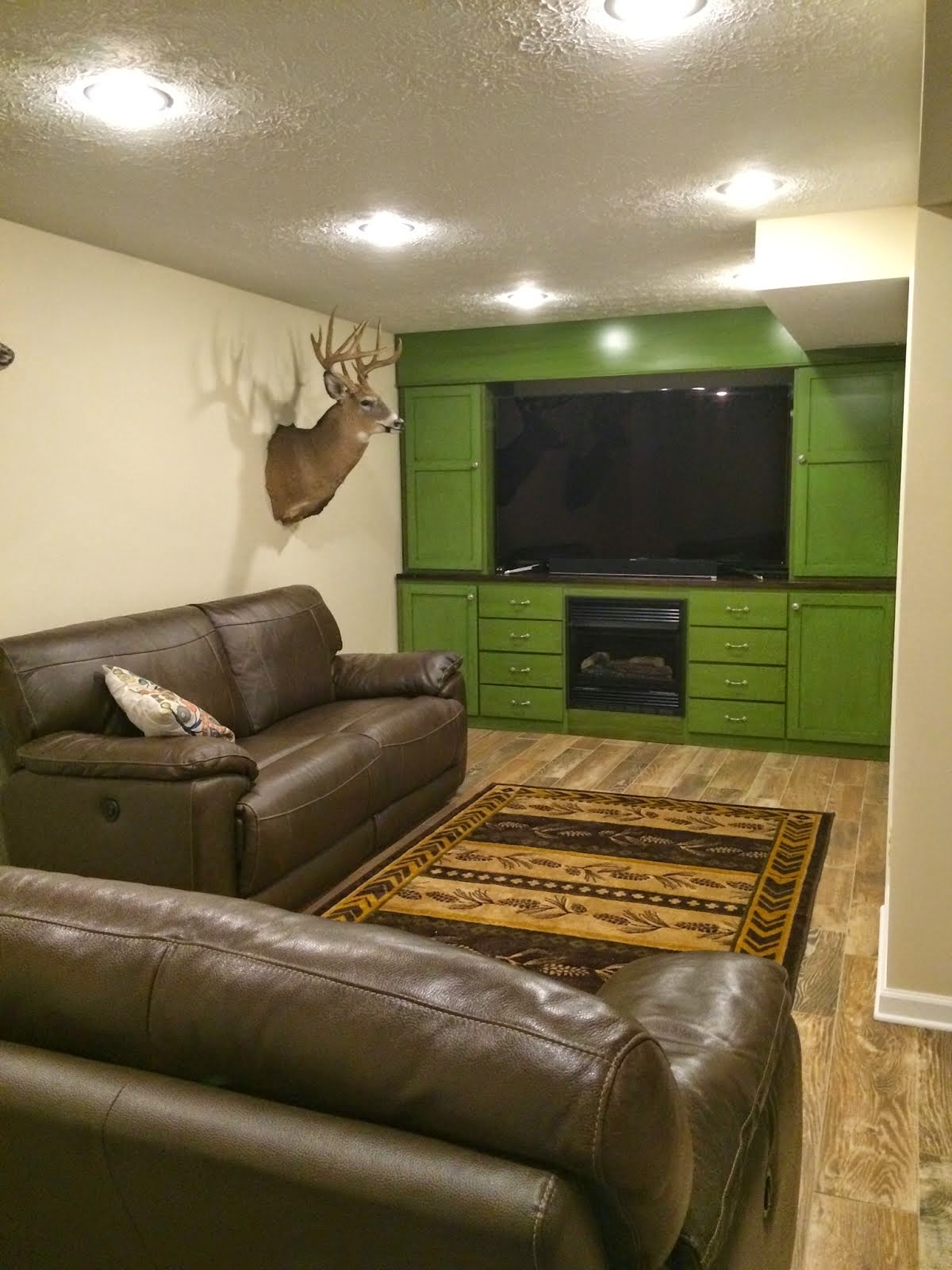 It reminds me of what a transformation Christ can make in our lives when we bring our tired, junky, dirty, worn out souls to Him and trade them for His righteousness, His transforming power, and His inexplicable peace that passes all understanding (Philippians 4:7).  He will carry our burdens, if we only let Him.  He is the Way, the Truth, and the Life, the Bible states that there is no other way to the Father but through Him.  (John 14:6).

God can make all things new.  He can cause a transformation like no other we even imagined.  Jim designed our basement transformation, but only God can design a new life in Him.  And if you are a believer, but your soul has gotten junked up in the process of life, won’t you come to Him right now and let Him carry your burdens and give you His peace and overwhelming victory?  Even if you just did that yesterday but you slipped up and allowed more junk inside, God has enough mercy to cover that too.  Bring it to Him.

Come on, let’s get going on this new life, let’s make new memories, let’s see what God can do!!!

“Ah, Lord God!  It is You Who have made the heavens and the earth by Your great power and by Your outstretched arm!  Nothing is too hard for you.
Great in counsel and mighty in deed, Whose eyes are open to all the ways of the children of man, rewarding each one according to his ways and according to the fruit of his deeds.”  Jeremiah 32:17,19

“Therefore, if anyone is in Christ, he is a new creation.  The old has passed away;  behold, the new has come.  All this is from God, Who through Christ reconciled us to Himself and gave us the ministry of reconciliation”  2 Corinthians 5:17-18