You are here: Home / character building / How God offers comfort in the tough times

Do you have an area of your life where you feel very much alone and in need of strength and comfort?  Are you at a loss because there’s nothing you can do about that situation?

Perhaps you walk a dark path now, feeling very much alone.  Draw near to God, my friend, and He will draw near to you! (James 4:8).  He is present in His promises.

Comfort from a death-bed

Deuteronomy 33 is entitled “The Blessing”.  Moses, speaking his last words before his death, blessed the people of Israel and reminded them that God called them His own.  He spoke of:

Next, there is the blessing upon the tribes of Israel, and the chapter ends with more praise to God and mention of:

And here we find our verse for the week.

“The eternal God is our refuge, and underneath are the everlasting arms.”  Deuteronomy 33:27a

Our God, Who “rides upon the heavens” accomplishing His will in His sovereignty – is our refuge.

Refuge:  habitation, or mansion-house, in which one is safe, and easy, and at rest, as a man in His own house.

Here’s some more fuel for that fire:

>>Psalm 91:1  “He who dwells in the SHELTER of the Most High will abide in the SHADOW of the Almighty” – He is our soul’s shelter.
Now nobody said anywhere in these Scriptures that this means is we are completely untouched and trouble-free.

In fact, what you can derive from these Scriptures is that we obviously still have troubles, and therefore need His refuge for these times.

Oh, if only we could escape difficulties and be free of such burdens in life.  That would be nice, would it not?

Comfort from a mother/grandmother 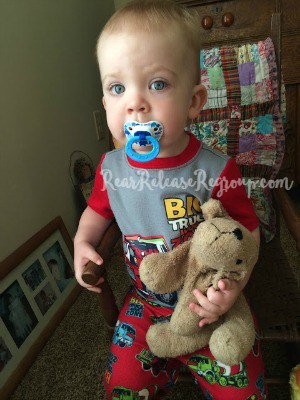 When my grandson, Sawyer, falls and bumps his head, it’s the end of the world.  We know he will be ok, but to him –  time stands still, and all is lost.

When we put safety gates up around the house, it’s not to keep him from having oh so much fun (he is really missing out on climbing up and down those steps), it’s to keep him safe.

And when the day comes that we take his pacifier (that blessed “Puck-puck” and comforter of all hurts and indignation), it will be because we love him and don’t want him to have “Billy Bob” teeth.

Also, most women do not find a 32-year-old man with a pacifier that attractive.

Through all Sawyer’s little injustices, Gigi and mommy are right there, never leaving him alone, holding, comforting, carrying him.

God takes care of us like that.  We are His little children, and He knows what’s best.  Even if it looks so, so awful to us, He’s still our refuge, our shelter, our hiding place, and our rest.  He will bring us through.

The everlasting covenant, and the everlasting consolations that flow from it, are indeed everlasting arms, with which believers have been wonderfully sustained, and kept cheerful in the worst of times; divine grace is sufficient for them (2 Corinthians 12:9)”.

Isn’t it wonderful that God promises His everlasting arms of strength to the believer, no matter what we may encounter?

I have a dear friend undergoing a dark season.  After she shared her difficulties with me, all I could think to do was send Scripture –  Deuteronomy 33:27, and she responded, encouraged.  She wrote it on a note card and put it where she could see it often.  Later, she told me the story of how that verse hit home. 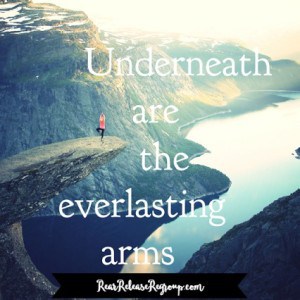 Since undergoing this trial, she’s been unable to sleep.  After one particularly long night, she felt as if the Lord had been carrying her – like the poem “Footprints”.  It describes a life as a walk in the sand where there are sometimes two sets of footprints, but during the low periods only one set can be seen.

The writer asks God why that was so, since God promised to be there with him during all seasons of life, but it seemed as if he was alone during the lowest times.  And God replied that He had carried him during those seasons.

As my friend arose, recalling that poem, she received a text from me with this Scripture.  She was both amazed and encouraged that God had shown her through her recollection of the poem and by my chance text of Deuteronomy 33:27 that He was indeed carrying her and right there with her, holding her close.

My friend has never been closer to the Lord and more in tune with Him.  She is a shining testimony of God’s faithfulness during dark days.

God is her refuge and comfort because she clings to Him.  She doesn’t isolate herself or sit in a corner feeling sorry for herself.  Oh no.  She is daily in the Word, offering up prayers of thanksgiving and petitions for peace.

Even in her heaviness, she seeks ways to help others and look out for their needs.  She’s serving in her church, praying for others, taking meals to the sick and bereaved (I can’t tell you the times she’s brought me a meal when I went through a rough patch).  She looks outside of herself.

Ever heard the song, “There is Joy in Serving Jesus”?  It’s true.

Suffice it to say, in order for God to be our refuge, we must draw near to Him.  Rest in Him, abide in Him and His Word.  Therein lies peace.

Let’s meditate on this wonderful verse!  Mull it over, pray over it, even memorize it.

And seek refuge in those everlasting arms.

“The eternal God is your refuge, and underneath are the everlasting arms”  Deuteronomy 33:27a