You are here: Home / Empty nesting / The Sawyer and Gigi Show

Perilous times, they are upon us 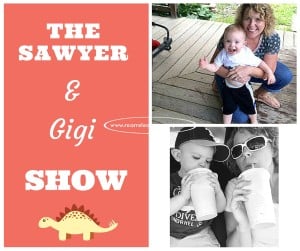 I rounded the corner just in time to see the two- year-old slide backwards with the chair he was standing on – its fall narrowly caught by the toy kitchen. Suspended mid-air, he hung onto the counter top.

His pursuit?  A Minions band aid box atop the kitchen counter.

If this sounds creepily familiar to you – as either a fellow Gigi or mama, read on, my dear, harried friend.

You may know that Sawyer and his family have been living with us for the past three months.

They moved out Saturday, but Sawyer (aka Tiny Tornado) and I are homies for life.

I know his ways.  How he thinks, what he’s saying (most of the time) and that he is the Energizer Bunny on steroids.

But it’s been a while since ole’ Gigi has kept him by herself.

I picked him up and away we went, TT chattering the entire ride home.

“Bee-u-ful trees!” (He heard his mama say that during fall – there’s not a leaf in sight now in brown-stick-land.)

…he reminds me of my Hayley when she was small.  The kid never stopped talking, and it always seemed to accelerate in the car.

(I actually used to crank up the stereo to give my ears a rest over top of her incessant, 3-year-old jabbering.  I’d say, “Uh-huh” and “Yeah!” Every few minutes to give the appearance of listening.  Is that terrible?  I’m sorry.  It was my coping mechanism at the time.)

Visit with the great-grands

When we got home, I took him for a visit next door to my parent’s apartment (which is adjoined to my home).

The first thing he did was head for mom’s computer to punch all the buttons.  Which he knows I don’t allow.

I redirected him back to the main living area to granddaddy and mamaw.  He made his rounds, knocking over his toy blocks and scanning his books, exclaimed over a few things and then

…headed back for the computer.

I very firmly told him no and once again rerouted.

Mamaw obliged him a graham cracker.

He climbed up at the table and proceeded to ring their 25th anniversary bell (he’s allowed).

Moving on to grab for pill boxes and a decorative flower pot, he was testing his limits.   I lifted him down.

Thinking to try a new tactic, he took mamaw by the hand, “Come on!”  And led her back to the hallway…and the computer.  (Thinking surely SHE’D let him play with it.)

Shut down once again, he opened and closed a few cabinet doors and pretended to stir with the old butter churn.

Next up:  Tiny Tornado took Granddaddy by the hand, “Come on!”  heading towards the forbidden area.

This kid.  He does not give up.

Finally, I decided to give myself a break and take him next door where I could gate him.  We headed for my place – down the stairs, through the garage, and up the basement stairs to the safely gated great room.

We breakfasted together (he likes to sit on my lap and eat whatever I’m eating – we are a germ sharing bunch), and watched a little Monster’s Inc.

My husband was out of town, so naturally, the plumber ended up coming to fix a water problem in our basement. (Don’t you hate when that happens?)

In between playing “Let’s line up all the animals and knock them down with race cars” and discussing the water issue with the plumber, the doctor’s office called to schedule outpatient surgery for my dad.

(As sole caregiver, I handle all mom and dad’s appointments.  We have quite a list.)

Surgery is scheduled for Friday.  I have to babysit the Tornado on Friday.  And all my kids are coming home (one with a new boyfriend for the family to meet).

You don’t even want to know all the other appointments already scheduled for this week.

God is in control.  He knew this before I did.

After nap time, I gave him ice water in his sippy cup and we did a little dancing around the table to “Ice, ice, baby” with Aunt Kylie.

She then left for her afternoon classes (Sawyer said he wanted to go to college too, but was lovingly voted down).

Scaling the gate and heading for the stairs, I decided to quickly fold some laundry while TT was occupied with his toys.

Upon returning, I noticed him sitting in the floor mashing his sippy cup upside down on his pants.

I got onto him about that and he stood up and growled.  Which I corrected.

He became distracted with his toy kitchen, so I ran upstairs to grab the sweeper (once again scaling the gate).

Sweeping down the stairs and into the foyer, I heard a noise and decided to check on the gated community.

And that is when I found him hanging onto the counter for dear life, grasping for the “MINIONS!!! MINIONS!!!”

I scaled that gate in double time, screaming, “SAWYERRRR!!!”

After the rescue (and the scold for climbing up there), I took a band aid out to give him, and he cried even harder.

Taping up the top of the band aid box, I handed it to him, which, upon receiving, he shook and cried some more.

Kneeling to open the previously mentioned band aid, I showed him the minions on it.

He wanted nothing to do with that bandaid.

And he became more upset.

Atop the band aid box had been a little plastic wrapped square with a batman (or “fatman”) emblem.  It was one of those little dried hand towels folded up into a tiny square – add water and it “grows” to regular size.

Grabbing the batman square, I picked him up. “Do you want to go sit on the sink and get this wet?  It’s going to turn into a wash cloth your daddy can use for your bath tonight!”

I think he was just as happy about playing in the sink water as he was the actual “fatman” washcloth.

Following sink play, I resumed sweeping with the gate down this time, little man “helping” by passing back and forth underneath the cord and jarring it unplugged.

After which, he escaped for greener pastures, aka upstairs.

At the end of the day, the little (pregnant) mama snuggled her Tiny Tornado. “What did you do today?”

Without missing a beat, he turned and gestured toward the counter and chairs, “I FALL!”

This kid.  I love him with all of my heart.

But I am older this time around. 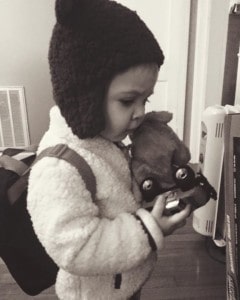 My body is tired and my joints are stiff.

It’s not like in the old days when I carried a baby on my hip for hours on end.

Now there is a lingering shoulder problem from that repeated action with Tiny Tornado.

But mom, let me give you some advice the next time you curse your strong-willer (aka “Swiller”) in the heat of the moment with:

“I HOPE YOU HAVE ONE JUST LIKE YOU SOMEDAY!”

…Better watch what you wish for – you may end up babysitting it someday.

God sure does have a sense of humor, doesn’t He? 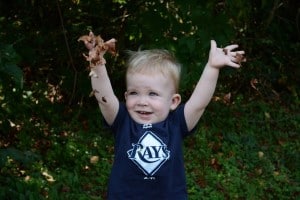